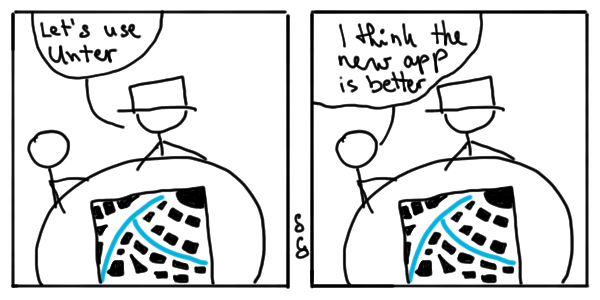 Andy Clarke is one of dozen or so people in the web industry whom I follow because what they say makes me either think and realize how much I don’t know yet or dig deeper and experiment on my own. So when his new book was released I had to get it.

In the design book world there are most often found two types of books:

Andy’s book doesn’t fit those two boxes. In the first two thirds he discusses things which aren't covered by books dealing with first point. Instead he discusses the design process, i.e. the hows and whys we should put images, texts and other elements on the screen. Art direction is described in a way that's transferable to both worlds, digital and analog, but the focus remains on the screen. Throughout the book there are applied examples of good art direction with explanations why it's good.

Somewhat I'm unsure why Andy couldn't decide between creating a app for criminals to get and a presentation about Amy Johnson. To a some degree the context switching from one topic to the other and back made the book a bit harder to read. But at the same time I am a bit unsure how to would I approach it as he was showing how to approach Art Direction for both the apps and web sites.

Last third of the book ties up the "theory" in previous chapters with contemporary coding techniques, mostly CSS Grid and Flexbox. Personally I can't judge this part that much because recently I've been getting a code fatigue when reading/watching[1. Same thing happened when I was watching Sarah Drasner's great course about design on Frontend Masters. Sorry, Sarah.] things about code which aren't standards, documentation or StackOverflow issues.

Art Direction doesn't fit to the second box because it doesn't cover ethics what and why we should design, among books like Design for the Real World or design meets disability. But I wasn't expecting this to be cover by this book.

Will definitely read it again.